This post aims to be a continual build up of technologies as I find them, read about them, try them. I want to keep a record of some of the technologies out there to be able to refer to it at a later date. If you know of or want to include something, please post a comment or send me a message, thanks!

Hardware Solutions Google Glass may be one of the newer promoted items in this field. It is now on it’s second iteration (Oct 2013). More information from http://www.engadget.com/2013/02/21/google-glass-patent-application-diagramsi/ initial image shown from Patent for Google Glass.

SenseCam [More Information on the website, where it has over 100 papers where SenseCam has been referenced http://research.microsoft.com/en-us/um/cambridge/projects/sensecam/ as well as more details of the system and where it can be purchased] from Microsoft Research, is a device to help someone remember what they have done throughout their day. It takes pictures that can be viewed later. It was intended to be used as a ‘black box recorder’ to track things all day, but they realized that through looking at the images after they were taken there was a higher instance of recalling the day / event. Another device that is a specific piece of hardware created to help with forgetfulness is the Item Locator. This flashes and makes a sound to guide you to your object that is missing. (image) 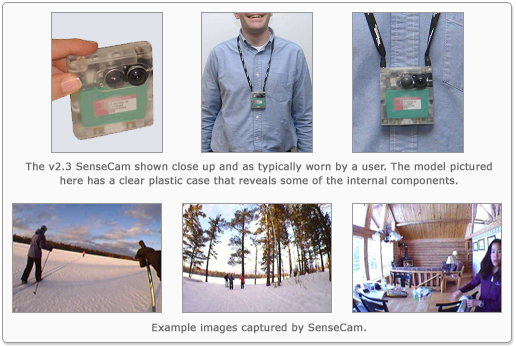 There are also pillboxes that dispense the pills needed on that day to help them to remember to take them. There was a more recent version of a pill dispenser box that also had LEDs on it so it would start to glow so the person had a visual notification that they had not yet taken their pills. This would mean the pillbox had to be somewhere in the open or where they would see it. Other hardware solutions include things like pressure mats under a carpet in the bedroom so you are alerted if they are out of bed, or sensors on lights to help them if they wake up. There are also devices to notify you if you have left the door open or left the gas on which are all really good safety issues covered for forgetfulness. Most of these solutions require teaching someone how to use them, and also requires them to have a new, foreign object in their house. Some objects were so bulky that it made the person use it feel uncomfortable so the social aspect needs to be taken into account when designing these aides.

There is this great Instructable for making a pill dispenser box of your own.

Tool Control http://www.aviationpros.com/article/10385420/ is primarily a safety system used in the Aviation industry. The tools are all tagged so they are checked in and out as well as they all have their place marked out (shadowing) so you can visually notice very quickly when a tool is missing.

Smartware solutions  Students at Simon Fraser developed the LadyBag; a concept for a lady’s handbag that use LEDs that are icons to tell the user what is missing from the bag. There is also an ‘emotional’ display based on how you are holding it. http://www.engadget.com/2006/04/24/the-ladybag-remembers-your-stuff-with-rfid/ A more recent study (Park, S., Zimmerman, J., 2010) defined what they believed would be the most useful way to design a smart bag. The smart activity bag proposed is a family system which enabled the kids to pack the bags easier, so helped the parents. It tried to focus on breakdowns, when were items forgotten and what types of items – removable items or items left in, wet swimsuit or empty bottle of water, in order to design the solution that would be the most useful to the family. The paper proposed designed concepts for bags trying to reduce the number of breakdowns that occur, though no bag was built. Important information to note was, “families would experience a breakdown triggered by forgetting a non-routine item. A well-designed smart bag would need to have different rules for what is missing at different times and touchpoints.  Additionally, the smart bag would need to know which items needed to be removed at any of the various touch-points.” 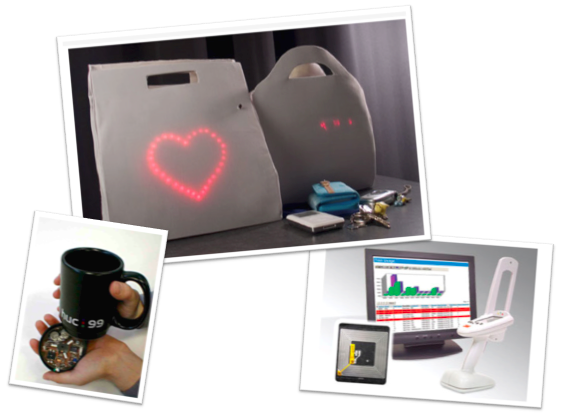 Additional insights from the paper were that families’ willingness to make checklists indicates some willingness for preplanning, which in the case of a smart bag would be the programming of rules for what is needed at specific times. This means that the bag could function as a more dynamic checklist. Many participants stressed their desire to interact directly with the bag. Lastly, they noted that it wasn’t an effort to cure forgetfulness, instead they saw it as a bag could function similarly to spell checkers in word processing software, which reduce the risk of sharing a message or document with a spelling error. The too reduces the effort needed to make a “good” document, but it does nothing to help people become better spellers.

Problems / shortfalls issues with current solutions  “Most current memory aids require active effort to engage the aid in order for the memory to be triggered” (Vemuri & Bender, 2004) Some of these solutions requires effort by the user to be able to use them successfully, and even then, they need to be continually used so that they do not need to relearn how they work. For some people they feel like a foreign object in the home and they are not comfortable with it, or they can feel like they are being watched in their own home.

Another point of view (from Spark, Episode 212: 42min) the idea of  design anorexia was discussed, where devices are becoming thinner and thinner, they are using glue not screws or clips, thinner glass making the newer products more brittle and less durable. If we are to be using devices that we want with the user everyday, in some way to be a part of their routine, we need to be aware of the longevity of it and robustness.