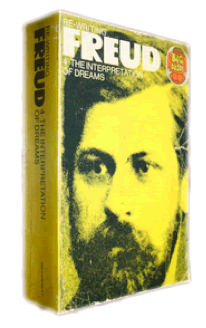 This is a book that was written from the algorithm created for the re-writing Freud 2005 initial version of this artwork in the Art of Readers exhibition. The program ran through an entire cycle, resulting in the book The Interpretation of Dreams being rewritten. This was published as a paperback edition.

RE-WRITING FREUD this is a re-written Sigmund Freud’s The Interpretation of Dreams. A computer program randomly selects words, one at a time from Freud’s 223,704 word text and begins to reconstruct the entire book, word by word, making a new book with the same words.The resulting book was one instantiation of that process, scrupulously typeset according to the dimensions, fonts, chapter divisions and paragraph lengths of the 1976 Penguin paperback edition of Freud’s work, and printed on equivalent paper stocks. A virus or process of contagion has been at work, intervening in Freud’s The Interpretation of Dreams, rupturing it and returning it to us in a new order. By subjecting Freud’s words to a random re-distribution, meaning is turned into non-meaning and the spectator is put to work to make sense of the new poetic juxtapositions. With a scrupulous formalism, this version of Freud’s text follows the conventions of typographic layout found in the 1976 Penguin edition of Freud’s work. The publication is edited by Craig Dworkin, Associate Professor in the Department of English at the University of Utah.