Re-writing Freud (touch screen kiosk edition), 2005 Arts Council and British Council funding received. This was first exhibited in the exhibition Un Art de Lectures, in Rennes France. It has since toured Scotland, London, Leeds and an electronic festival Prog:Me in Brazil. I created the technical aspect to the work, including the choosing of the kiosk, the installation and programming.

This program re-wrote the entire book, The Interpretation of Dreams, but in completely random order. It was different every time it was re-written and you had the choice to print the page you were writing or to print the entire newly written book at the end of the program cycle. It took the program roughly 3 days to write the book completely. The kiosk could be seen initially on pause, and it would enable the viewer to pause / play the work. It was important to add some form of interaction for the user. In a way they would feel they had the ability to create their own individual pages of Freud’s words. 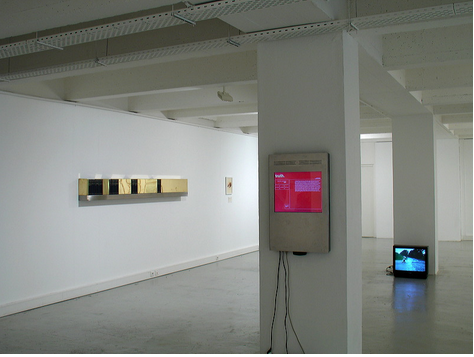 I wrote the program in Lingo at the time, using DirectorMX as it seemed a good choice for the interactivity and the platform from what was available to me. It formed a bulk of my MSc study to look onto interactivity and what ideas were around at the time as well as ways to display this information in a gallery setting. From that work, it wrote one complete copy that we documented, and it was made into an edition of the book, Re-Writing Freud.

So excited! Lovely @Mini_Cen #miniware tips have arrived for my #TS80 portable #solder iron. Can't wait to try them out!! #maker

This is lovely... I just backed Computer Engineering for Babies Book on @Kickstarter https://www.kickstarter.com/projects/babyengineering/computer-engineering-for-babies?ref=thanks-tweet

Never underestimate the power of giving someone your full attention.

Some of the photos of abandoned buildings on my site have been minted and are for sale through auctions at OpenSea as NFTs. Visit my collection~