Yo! Create (iOS App), Oct. 2011
An app to help creativity, through the use of exercises and activities to try. Coded in Xcode.The app needs work and a lot of additions still but was an initial idea to try to incorporate ideas about creativity, and idea generation exercises to help people who are trying to think projects through etc. It is something I want to continue work on and I think it would work really well as an iPad app, with more space visually and possibly more varied techniques for them to try. 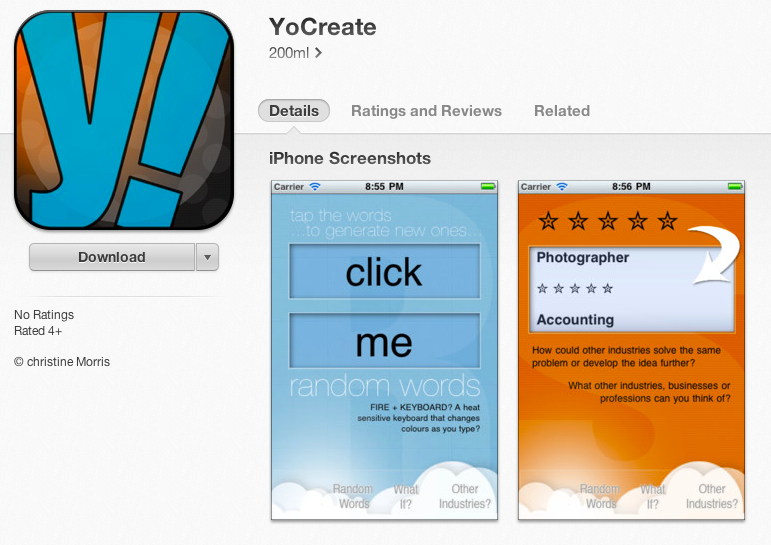 Almost a year ago (2010) I had an app idea for an app that I would like to use with/for my students. I got very excited at the idea, and set out to map it out and around six months ago, after brainstorming with a Twitter mate the app name of  ”Yo! Create” came up. It was a brilliant idea and I had to go with it, so I booked it on the app store.

Meanwhile, (back at the bat cave and all that), I set to design it for iPad, and decided to use the shiny new beta of Xcode, which I knew would probably mean apps would be able to be submitted for October time. ‘No problem’, I thought, because I wanted to get this first version right and lay down the foundations for updating it too. I tried a few alternative interfaces and finally settled on one particular design.

I started building it with the new StoryBoards feature in Xcode and then by the time it was looking alright and like I was making progress I got an email saying that I was going to lose the name for ever if I didn’t submit my binary within two weeks. There had been other notices but it was going to an email address that hadn’t been working so I didn’t realise this was about to happen. By the time I realised, I had over a week to submit my unfinished app.

The problem was- I’d done it in the Xcode that wasn’t able to be used to submit an app with yet, and it had Storyboards, which wasn’t backwards compatible *pulls out hair*. So I had to go into an old Xcode and start fresh, just make a quick iPhone version and get it submitted so I didn’t lose that name.

Long story short… I managed to get a working – and not to shabby version of Yo! for iPhone submitted and approved. I have not made it live on the store just yet as I am now in a dilemma – do I resurrect the original iPad version and build upon that, resubmit and go from my initial plans? Or do I work with what was approved as it’s actually a good base to the app anyway and add the iPad version as was intended?

I am bordering on just releasing the initial app as it is for free to get some feedback and make decisions from there… but just to send a little reminder out there- plan in the timeframe for your reserved app names as you may find you lose it forever.